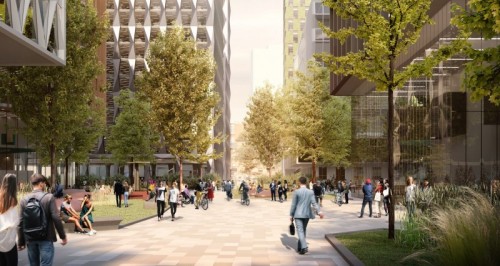 Today, The University of Manchester announced it has progressed to the next stage of the process to find a development and investment partner to deliver the £1.5 billion new world-class innovation district ID Manchester.

At the end of February, the University received outline submissions it had invited from bidders following the initial round of dialogue. The University has notified all of the bidders that it has reviewed the submissions received and will proceed in due course with detailed dialogue with the four highest scoring bidders.

In light of the Coronavirus outbreak, the University has notified the four highest scoring bidders that it is pausing the procurement process and the timetable for the detailed dialogue stage for eight weeks, when the situation will be reviewed.

Professor Dame Nancy Rothwell, President and Vice-Chancellor of The University of Manchester, said: “Clearly, it makes sense to pause the procurement process as we all adapt to the unprecedented circumstances caused by the coronavirus outbreak, but we remain committed to this project and I still truly believe we can make ID Manchester the innovation capital of Europe, providing the perfect conditions for organisations of all sizes and from different sectors, to share knowledge and work together turning incredible ideas into reality.”

Diana Hampson, Director of Estates and Facilities at The University of Manchester said: “This is more than a property transaction. ID Manchester will create a new, world-class innovation district situated in the heart of Manchester and alongside the University. Although we are pausing the procurement process in response to current circumstances, we look forward to resuming detailed dialogue with the selected bidders (perhaps using some alternatives to face-to-face meetings) in order to advance this exciting project.”

The Vision for ID Manchester

ID Manchester will be a new neighbourhood that will be an engine for economic growth with the potential to create over 6,000 new jobs.

Since 2004 the University has contributed £746 million to the economy through nurturing and developing businesses spinning out of its research and development facilities, and it is on these foundations it seeks to build ID Manchester.

The site benefits from existing green space and the unique feature of the 650,000 square feet (60,000 square metres) Grade II-listed Sackville Street Building, which offers a fantastic opportunity for repurposing.

The University occupies the recently opened £60 million Masdar Building, home to the Graphene Engineering Innovation Centre, and the Manchester Institute of Biotechnology at the south end of the site and is looking for a partner to develop the remaining c.18 acres (7.3 hectares) of the site.

ID Manchester is adjacent to Manchester’s main public transport hub, Piccadilly Railway Station and is a 20-minute train journey to the international airport.

ID Manchester is one of the last major development opportunity sites in the city, another piece in the jigsaw of the major regeneration taking place in that area of the city, including Mayfield, London Road Fire Station, Kampus, Circle Square and the £1 billion investment already being made into its main Oxford Road campus by The University of Manchester.