Crops can resist droughts thanks to microbes living in soil 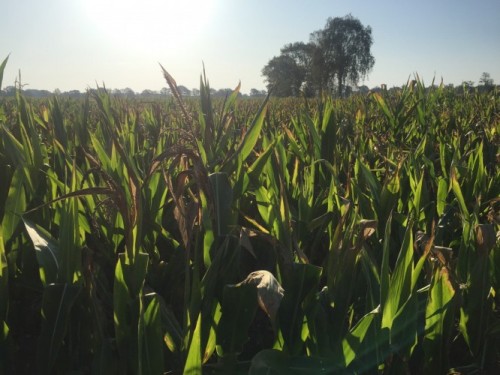 New research has shown that crops facing drought conditions can become more resilient to climate change by understanding what is happening in the soil below.

Humans rely on crops to feed the world, a world where climate change is making drought an increasing problem. How crop plants respond to drought doesn’t just depend on the plants themselves, it depends on the microbes that live around their roots.

In the new issue of Science an international team of biologists, led by Franciska de Vries of The University of Manchester, urges the scientific community to spend more time researching the interaction of food crops with their root microbiome. They argue that this knowledge is essential for the protection of crops form the effects of droughts, and thus for making them more resilient to climate change.

The present climate crisis poses a number of challenges for crop farmers. In some parts of the world, farmers face increasing periods of drought. Solving this by increasing irrigation is not always an option. Fortunately, there may be other solutions.

Professor Franciska de Vries, who is now working at The University of Amsterdam’s Institute for Biodiversity and Ecosystem Dynamics is first author of the new paper. She explains: “It is well-known that the bacteria and fungi living on plant roots influence the plant’s health. It is comparable to the microbiome in our own guts.

“Beneficial bacteria living there are essential for our health, and the impact our microbiome has on our body depends on the types of bacteria present, their activity and their numbers.”

Dr Chris Knight, Senior Lecturer at The University of Manchester and co-author on the paper said: “The question is, how much do we really understand about how these microbes help or hinder plants ability to resist drought in the first place and recover from it once it’s happened? And where we do understand the ways the plants and microbes affect each other, can we use that understanding to come up with ways to make crops of the future resist drought better?

“The answer is that we do have some understanding, but to use it effectively, we need more research testing microbes directly on crop plants. We have identified ways in which we can better understand the particular characteristics of the microbes and the plants in their responses to drought. These will help scientists focus future research in ways that help in producing crops that are resilient to the changes in global climate currently under-way.”

In the new paper, the biologists highlight a number of promising directions of research. The relationship between plants and the micro-organisms associated with them is often complex. For instance, indirect effects of drought mediated by the plants can have a larger effect on the microbial community than the direct effects of the drought itself. One of the ways plants influence their microbiome is through so-called root exudate, the carbon-rich fluid excreted by plant roots on which micro-organisms feed.

“My own research has shown that grasses can change the composition of their root exudate under the influence of drought, thereby increasing the activity of their microbiome,” says De Vries. “There are indications that this nudges the micro-organisms into releasing more essential nutrients from the soil, which in turn helps the grasses recover from the drought.”