Targeting multiple cancer genes could be key to treating leukaemia 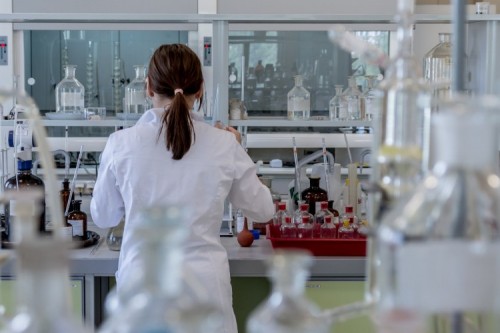 Faults in genes directly work together to bring about the deadliest form of blood cancer, scientists have discovered in a study that could pave the way for better treatments.

The findings, published today in the journal Nature, suggest that targeting two genetic faults in cancer cells in people with acute myeloid leukaemia (AML), rather than just one, could hold the key to successful treatment for some patients. Currently, fewer than two in 10 people survive AML longer than five years, and survival rates have hardly improved in the last 20 years.

Researchers at The University of Manchester, funded by the charity Bloodwise and the Oglesby Charitable Trust, worked with scientists at the Memorial Sloan Kettering Cancer Center in New York to analyse genetic readouts from nearly 1,000 AML patients.

The study, which involved the University’s Division of Cancer Sciences and the Cancer Research UK Manchester Institute, found that a key gene, called SRSF2, becomes faulty in more than 10% of AML patients – and that around half of these also carry damage to another key gene, called IDH2.

In healthy blood cells, these two genes play important but very different roles in maintaining normal blood function. Although both genes have been linked to blood cancer before, the scientists found that faults in these genes develop together more often than expected by chance alone. And that, in mice, AML develops much more quickly and aggressively if leukaemia cells carry damage to both genes together.

The researchers discovered that the two mutated genes work together to cause huge disruption to RNA splicing – a fundamental process used by healthy cells to deconstruct and reassemble the DNA code to make healthy proteins.]

They found one protein in particular, INTS3, that was particularly disrupted and inactivated in these patients, and which they found for the first time to be directly involved in the change from healthy blood to leukaemia.

Importantly, both IDH2 and SRSF2 are promising targets for new treatments. A drug against faulty IDH2 has already been approved by the FDA in USA, and drugs targeting faulty SRSF2 is currently in early clinical trials. This study suggests that targeting both together might be more effective than targeting each individually.

But researchers warned that if the findings in mice are replicated in humans, it will still be a number of years before these drugs became available as part of routine treatment.

Dr Daniel Wiseman, from The University of Manchester, who was one of the leading authors of the study said: “There is a lot of excitement around precision medicines that target specific genetic mutations in cancer cells, but to make this a reality we need to better understand what these mutations do, and importantly how they work together in patients.

“Our research shows one of the first examples of how faults in two very different cancer genes cooperate together and bring about other, unpredicted consequences. This helps us better understand the complicated process by which healthy blood cells turn into leukaemia cells. It also suggests that sometimes the best way to kill cancer cells might be to target different genetic mutations in combination.”

Dr Alasdair Rankin, Director of Research at Bloodwise, said: “Curing AML today is really difficult and needs treatments that are just too harsh for most patients. Blood cancer research is putting new precision medicines in the hands of doctors that allow kinder treatments for more people. We can turn this progress into cures for everyone with AML, but we need to understand how to use these new drugs in the right way in the right person – this important study shows us how can get there.”

Nearly 3,000 people are diagnosed with AML each year in the UK and around one in five of these patients have a mutation to IDH genes.

Cancer is one of The University of Manchester’s research beacons – examples of pioneering discoveries, interdisciplinary collaboration and cross-sector partnerships that are tackling some of the biggest questions facing the planet. #ResearchBeacons