A Politics and Modern History student from the School of Arts, Languages and Cultures has won £12,000 Venture Further funding for her Invisible Manchester social mobility start-up.

Alice Sparks will use her investment to grow her enterprise, which trains those who have experienced homelessness in Manchester to become tour guides who will take groups around the city and enlighten them about its history, the future and their own experiences on the streets. 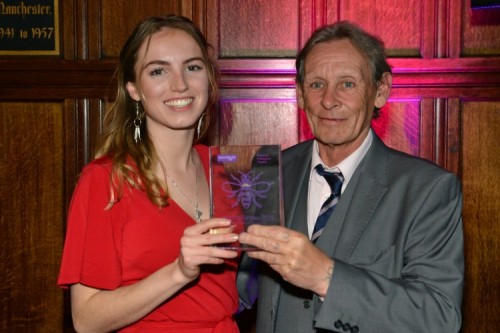 As well as bringing a new perspective on Manchester – a city with some 5,500 reported homeless – Invisible Manchester will provide additional support and a source of income for tour guides.

Run by Alliance Manchester Business School’s Masood Enterprise Centre, Venture Further is a start-up competition with a £75,000 prize shared among winners. This time around was the first time the competition – with input from Creative Manchester – also included a Creative category.

More than 65 start-ups entered the Venture Further competition, and Invisible Manchester was one of five winners, reaching the top spot in the Social Responsibility category. Other categories included Business, Environmental and Technology.

“When I put myself forward for the competition earlier this year, I never thought I’d be one of the five successful start-ups to get a share of the funding. So many other great businesses entered,” said Sparks.

“I launched Invisible Manchester nearly two years ago as I just couldn’t sit back and do nothing while the number of homeless people in the city rose. It’s important that people learn about homelessness, and those who have experienced it themselves are the best placed to teach people.

“I can’t wait to put this money to good use and get more people involved in Invisible Manchester!”

Competition Director, Dr Martin Henery, said: “We have seen an increase in both the quality and preparedness of the proposals being entered. There is more evidence of a ‘minimum viable product’ and early testing with prospective users and potential customers, the proposals are much more credible.

“In addition, the quality of some of the presenters has been remarkable causing some of our judges to comment that on any other day; they would have invested in those individuals there and then.

“These increases in quality don’t make the job of our judges any easier. However, it does remain an immensely enjoyable and rewarding task for all involved and something they wish to repeat year after year.”